Why has Canada gone so long without a comprehensive Organized Crime Strategy?

Canada’s anti-money laundering regime is grounded in a foundation of three pillars: Policy and coordination being the first; investigation and prosecution the second; and deterrence is the third pillar. If we can’t successfully prosecute sophisticated organi­zed crime, the second pillar has failed – and directly results in there being little to no deterrence for trans-national organized crime groups who see Canada as one of their safe havens. And, as a result, all the efforts by law enforcement and the private sector to combat money laundering risk being neutralized.

Organized crime groups are involved in a plethora of businesses and criminal enterprises which add to the challenge of enforcement. As such, the investigative requirements often involve complex legal challenges related to criminal activities.

In a nutshell, organized crime today is very organized, while on the other hand, law enforcement is quite fragmented.

The combination of RCMP, which can only be described as an organization in a heightened state of flux, and municipal forces which allocate their resources based on community needs, leads to an environment wherein organized crime is not getting the attention or resources needed to effectively combat highly organized and networked criminal activity.

Canadian policies have unfortunately been dictated by political considerations, often in response to particular crisis. A recent example is the focus on removing handguns and other firearms from society when reality would dictate that the firearms of concern are the illegal weapons coming from the United States.

The Canadian Chiefs of Police Association has advocated strongly for measures to effectively thwart the illegal flow of guns from the U.S. rather than focusing on legal firearms. It is clear that both criminal gangs and various organized crime groups are behind this flow of firearms – which begs for a comprehensive organized crime strategy.

Ports and airports (busy entry points for both goods and people) fall under the jurisdiction of the federal government in Canada. There are well-documented cases of organized crime infiltration (especially by bikers), some of which I witnessed firsthand during my policing career, both in Vancouver and Montreal. Such infiltration facilitates the free flow of dangerous and illegal drugs and guns into Canada.

Another illegal enterprise relying on lax enforcement at these ports is the stolen vehicle market which ships stolen vehicles overseas. It is estimated that a vehicle is stolen every 6 minutes in Canada resulting in a cost to insurance and consumers of $1 billion. Of that, 54.2% was paid directly out by auto insurance companies. Their claims payoffs were a total of $542 million. The remainder includes the cost of police services; prison and justice services; and health care for victims.

Why are our key agencies still operating in silos? There are many organizations with a focus on fighting organized crime: The Royal Canadian Mounted Police (RCMP), the Department of Justice, the Department of Finance, the Criminal Intelligence Service of Canada (CISC), the Canadian Security Intelligence Service (CSIS), the Communica­tions Security Establishment (CSE), FINTRAC (Canada’s financial intelligence unit), the Canada Revenue Agency (CRA), Canada Border Services Agency (CBSA), and Immigration Canada should all be partners in lock-step.

Importantly, these Federal entities also need to collaborate with provincial and municipal partners, including the frontline police forces that are involved in countering domestic and transnational organized crime activity.

Unfortunately, Canada is Attractive and Welcoming

The following key factors have led to Canada becoming a “destination of choice” for Organized Crime:

Since 2019, there have been three major organized crime investigations that have failed. Costing millions of dollars to investigate, significant organized crime figures were able to evade prosecution as a result.

These three files highlight the critical need that exists in Canada to undertake a public inquiry with an objective of making solid recommendations focusing on an organized crime enforcement and prosecution strategy. 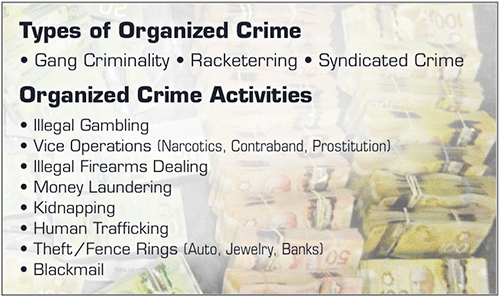 E-Pirate, a British Columbia multi-million-dollar money laundering investigation highlighted leadership and prosecutorial issues which resulted in the case being stayed. The investigation focused on the operations of an underground quasi-bank called Silver International. The case highlighted how Chinese criminals relied on Silver International to exchange currency which was then used in gambling and acquisition of Chinese fentanyl.

Following an RCMP internal review, Postmedia reported: “Sources say the review concluded that RCMP investigative standards were not always met, that there were leadership problems resulting in breakdowns of supervision over investigative teams, and that in some instances proper documentation wasn’t kept. But the biggest complication in the case was the inadvertent disclosure of unredacted files to Silver’s defence team and concerns that some of the information could identify confidential informants.”

This case became front and center at the Cullen Commission since the main targets were heavily involved in utilizing the BC River Rock casino to wash what had all the hallmarks of drug proceeds.

Having been involved in numerous high-level investigations involving thousands of disclosure documents, I can state that this should never happen. Had there been a crown assigned to the case at the outset, working together, as was previously carried out in the Integrated Proceeds of Crime Units, this error would not have occurred.

In a second case, February 2021, Project Sindacato, it is alleged investigators listened to communications between the accused and defence counsel. This was deemed one of the largest police investigations into organized crime in Ontario's history and it failed due to investigators allegedly illegally intercepting phone calls during their investigation into suspected organized crime activity in the Greater Toronto Area.

The investigation initially resulted in charges against nine people in Canada who police alleged were part of a criminal organization with ties to the Costra Nostra in Italy. Unfortunately, prosecutors stayed charges against six of the accused, including alleged boss Angelo Figliomeni, after defence lawyers raised concerns that investigators committed “significant breaches of solicitor/client privilege.”

Again, this case highlights that long, complex, organized crime investigations required expertise and an assigned Crown to be involved in the investigation. Failures of this magnitude leave Canada vulnerable to ongoing criminal activity give brazen organized criminals further evidence that they are untouchable by Canadian law enforcement.

In May 2022, we witnessed a 2-year investigation against the Hells Angels fall apart due to alleged delays in the prosecution. The investigation involved 14 police agencies working together starting in 2018. The investigation, dubbed Project Hobart, targeted sports betting websites and cash operations in an underground gambling ring that, over six years, funnelled some $160 million to the Hells Angels in Ontario. The investigation included evidence of threats, intimidation and force being used by numerous Hells Angels and their affiliates. The prosecution of more than 30 people was expected to be the culmination of Project Hobart, a multi-year investigation that involved 11 months of wiretaps, 170 judicial authorizations, and 11 confidential infor­mants. However, only two prosecutors were assigned to the case, resulting in extensive court delays.

This is not the first Organized Crime case that was stayed due to delays in the court process. Criminal charges laid in November 2010 against a high-ranking member of the Nanaimo Hells Angels were stayed in 2013 by a BC Supreme Court judge who ruled his Charter rights were violated because the case was taking too long to get to trial.

Similarly, an investigation that began in 2010 in Nanaimo resulted in 31 alleged members and associates of the Hells Angels being arrested on drug charges, but those charges were thrown out in 2013 due to what the Judge cited as unreasonable delays before trial. These stemmed from slow disclosure on the part of the Crown.

Due to the transnational nature of these criminal enterprises, the FBI leverages relationships, domestically and abroad, to combat the influence and reach of these organized crime groups. The Bureau deploys subject matter experts to international locations to develop strategies to address TOC matters impacting the region, as well as to identify targets of mutual interest.

Their website further states: “The FBI uses a variety of laws, asset forfeiture statutes, and sophisticated investigative techniques in its domestic and international cases. The criminal and civil provisions of the Racketeer Influenced and Corrupt Organizations (RICO) statute are particularly suited to dismantle criminal organizations. Our organized crime investigations frequently use undercover operations, court-authorized electronic surveillance, informants and cooperating witnesses, and consensual monitoring. Many of these are conducted in concert with domestic and international police agencies. The FBI investigations focus on major international, national, and regional groups that control large segments of the illegal activities.”

Prior to the Cullen Commission in Vancouver and following the review by Peter German, MLA and Attorney General for BC David Eby wrote to then-Public Safety Minister Bill Blair recommending the need to look at Canada’s Racketeer Influenced and Corrupt Organizations Act (RICO). Global News reported that: “In his letter, Eby adds that German, the former RCMP leader and lawyer tasked by B.C.’s government with studying money laundering concerns, advised him that Canadian organized crime provisions have been ‘singularly unsuccessful’ in tackling ‘actual’ organized crime. And due to various impractical Canadian legal procedures, Eby wrote, organized crime prosecutions are often stymied by an ‘expanding criminal discovery process’ that mostly benefits criminals, without ‘apparent significant benefit, to the goal of preventing wrongful convictions’.” Attorney General Eby continues to draw attention to the need to actively and aggressively pursue OC.

A 2021 CISC report into the threat posed by organized crime stated: “Serious and organized crime, primarily comprised of nationally and internationally-connected networks of groups operating both independently and together to further collective criminal goals, remains a pre-eminent threat to Canada’s public safety. With almost half of the assessed [Organized Crime Groups] operating across multiple domestic jurisdictions, and 25% also operating internationally, and nearly all OCGs likely using technology to enable their criminal activities, it is clear that the law enforcement community must increasingly work together to combat organized crime threats.” The report further indicates that 469 OCGs have been assigned a risk rating, 14 of these are considered high risk, and 118 a medium threat risk.

OC in Canada is not “just” something engaged in by ‘Mafia’ style groups in specific sectors. Nor is it “just” distribution of drugs (which has resulted in the fentanyl crisis, and its impact goes far beyond the what Canada witnessed during such high profile events as the ‘biker war’).

We must recognize, through the Charbonneau Commission, that we saw first hand how organized crime infiltrates our total fabric of society. We have seen the devastation from the flow of illicit firearms coming from the United States and how street gangs have created havoc in many marginalized neighbourhoods. We are seeing human trafficking on a huge scale, and this impacts many families throughout Canada. The pandemic highlighted how organized crime was able to adjust and focus on cyber crime, which has escalated to what can only be described as a cyber-pandemic.

We need to acknowledge the fact that the organized criminal pursuit of profit needs to be recognized in all its forms along with its varied consequences. These range from readily recognized violence and economic loss to the less easily quantified but no less important environmental, social and health and safety implications of some OC-related activities.

We need to fully support and fully fund all efforts to thwart and prosecute Organized Crime in Canada.

___
Garry Clement has 34+ years of experience in the policing sector, including as RCMP Superintendent and Chief of the Cobourg Police Service. He is currently the Chief Anti-Money Laundering Officer at VersaBank and has worked in the area of financial crime and organized crime for more than 45 years.