The Israeli-developed EZ Raider personal transportation system for security personnel and soldiers will soon have an autonomous version, and that is generating "big interest," says retired Brigadier-General Miki Bar, CEO of DS Raider, the company that developed the systems. DS Raider is cooperating with other companies to offer a version that will move to the commands of a Lidar laser radar and is equipped with intuitive and accurate driving system controls.

Transporting soldiers or security personnel and equipment through rough terrains requires tactical solutions that can navigate in terrain previously only reached by foot. The four wheels are connected to special suspension systems that gives every wheel an independent horizontal and vertical movement and "allows the vehicle to cope with rough terrain" BGen Bar tells FrontLine.

The EZ Raider HD 4 is an off-road electric-powered manned vehicle that without a doubt creates a new category in the field of personal tactical vehicle. The vehicle has a unique go-anywhere mobility capability, and thus acts as an operational power-multiplier for the user. 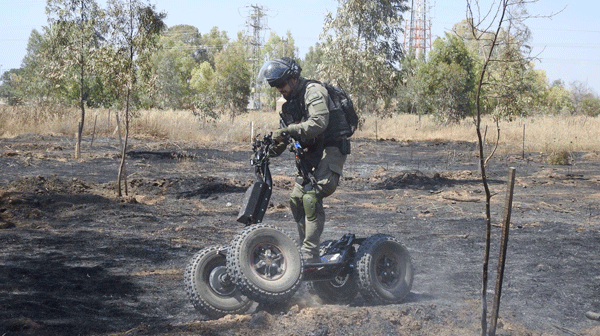 The U.S armed forces have evaluated the vehicle and, after a successful set of tests, have purchased a number of them to continue their operational evaluation.

The vehicle’s operational simplicity, reliability and durability, is intended to enhance advantages in a variety of operational scenarios with a high level of safety for the user.

Powered by two 1200 W electric motors, the vehicle can carry up to two fighters with full combat gear. It can tow a special electric-powered cart to transport additional equipment. The electric motors with high torque and precise response to user commands and powered by a 3000 W battery gives the vehicle an operational range of up to 80 km. 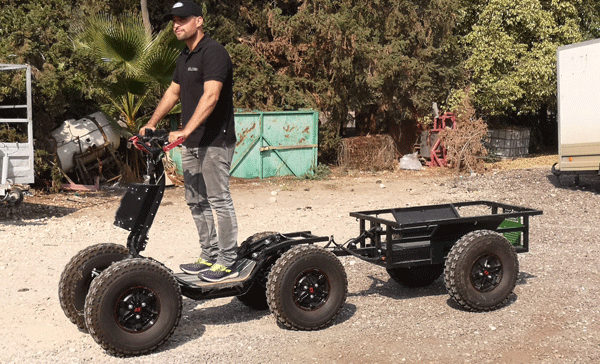 The board on which the soldier stands is 20 inches above ground, and adds to the vehicle's capability to move in rough terrain. "The soldier uses body movements like the ones skiers of water gliders use to control the movements," says Bar.

Its IR signature is also very low, a fact that adds to its stealthiness. "The electric motor emits something like 122°F and that can be lowered with simple heat shielding materials."

The Israeli police currently use the EZ Raider HD in its border police units.